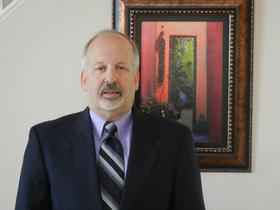 Born in Tel-Aviv in 1954, Moshe began his violin studies at the age of eight with llona Feher. During these early years, Moshe performed with Shlomo Mintz, and was a featured guest artist on Israeli TV at the age of eleven. In 1973, he participated in a seminar under the guidance of Isaac Stern, Pablo Casals and Alexander Schneider.

In 1976, Moshe came to the U.S.A. and studied with Shmuel Ashkenasi of the Vermeer Quartet. He received his Master's degree in Violin Performance from Northern Illinois University and studied with Raphael Bronstein and Dorothy Delay. Moshe performed in the Aspen and Colorado Music Festival.

Since 1982, Moshe has taught strings in private studios and public schools, and has performed throughout Arizona. As the Executive Director of the festival, he oversees daily operations, marketing and hiring of artistic personnel. He works closely with the artistic director to bring nationally and internationally known musicians to the Festival.

The vision of Red Rocks Music Festival's founder and executive director, Moshe Bukshpan, is "to grow the Festival into a major cultural event in Arizona and convert it into a cultural magnet for music lovers from around the world.”